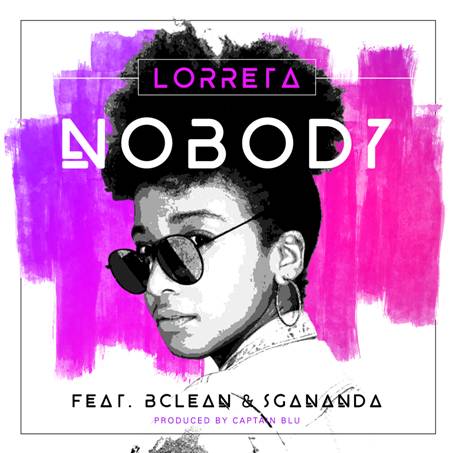 Lorreta is a South African born singer/songwriter, aspiring presenter and entrepreneur. Originally from Sydenham in Durban, now based in Pinetown in the city, Lorreta has already achieved major strides in her career so far, having shared the stage with SA music stars with the likes of Nasty C, Babes Wodomo, Zakes Bantwini, Siphokazi and others.

Her latest offering titled “Nobody” sees her partnering with one of Nigeria’s hottest Reggae/dancehall exports, B’Clean (who is signed to the renowned Nigerian duo P-Squared). She’s also collaborated with local Kwaito newcomer, Sgananda Shezi – popularly known for his performances on the hit soapie “Uzalo” on SABC 1.

This club banger released on 16 May 2018 and presents a dancehall and afro-beat style whilst honing in on the currently trending Gqom wave, but still remaining true to Lorreta’s remarkable RnB/Hip Hop flair in perfect harmony. “Nobody” debuted on radio stations in Cape Town (Bush FM) and Durban (DYR FM, Vibe FM, Radio DUT) among others.

Commenting on the inspiration behind “Nobody”, Lorreta said: ”I’ve always been fascinated by reggae and dancehall music hence I felt the need to create a ‘feel good’ track of my own with elements I enjoyed. I enjoy making interesting musical blends and I wanted to share a piece of my world by showing the masses where I’m from by including the local ascents of Kwaito and Gqom.”

She is extremely excited about the collaboration with B’Clean and Sgananda: ”To be honest, B’Clean’s role on this track was initially intended for Ghana’s dancehall Queen ‘AKsongstress’ and when a trusted talented producer friend of mine by the name of Captain Blu introduced me to B’Clean’s music, I immediately knew he was the man to bring it all together. As for Sgananda, his raspy deep voice is one of a kind and I anticipate all the ladies falling in love,” she smiled.

“In thought merging dancehall, R&B, Gqom and Kwaito together seemed like a wild idea and at some point even my producer thought I was crazy, but I had a vision and I was determined to pull it off. I soon found out that optimism and focus is contagious because the beat that my producer eventually created is the proof in the pudding, it is fire!” she said.

The 28-year-old is determined to make her mark in the music industry in SA, Africa and abroad. ”I’ve always believed that I was born to be great and furthermore that the economies of time will eventually work in my favour if I’m consistent in my beliefs, that build my character, that translate into actions/activities that will eventually impact the community. My start just happens to be in music. I would like to encourage all, and especially women, out there by saying that whatever your dream may be remember that optimism is the key, many people have ambition and talent but optimism is the key that rewards your patience.”

Lorreta’s music video debut, “Mood” released in February 2017 and has been flighted on TV music programming channels like TraceAfrica, MTV Base and Channel O. She later released “On Fleek” a trap song that playfully honours the strength and prowess of all women and their confidence in their own skin.

Following the success of these releases, Lorreta’s newest release, “Nobody”, is now available on iTunes, Google Play, Deezer, Spotify, SoundCloud and YouTube.

Born October 11, 1989, out of Durban, South Africa comes a much swaggered vocalist that has the R&B flair that reminds us of the late Aaliyah. Lorreta grew accustomed to hearing the jazzy undertones of international greats: George Benson; the soulful rhythms of Lauryn

Hill; and poetic melodies of the late Tupac. One will easily hear the impact of the 90’s R&B and Hip-Hop within Lorreta’s sound, spliced with new-age African undertones.

Lorreta is not just a pretty face, an alumni of the University of KwaZulu-Natal and someone with sharp business acumen, she boasts an Honours degree in Finance and Economics and a flourishing local textile manufacturing business. Lorreta is the dream that the music industry has been waiting for: business savvy, all-round performer and an accomplished artist. Her delivery is flawless and her vocal capability encompassed by the mellow grooves in her tone, really leaves you wanting more.

In the fairytale like progression of Lorreta’s career, the visuals of her debut release “Mood” has already playlisted channels like TraceAfrica, Mtv Base and Channel O – she also co-directed the video!

On the anniversary of her debut, Lorreta saw it fitting to drop a track that pays homage to the pivotal role that women play in society with “On Fleek” – a trap song inspired by Beyonce’s 7/11. “On Fleek” features rap-singing vocals over a warped up-tempo beat with African nuances in its execution.

Lorreta’s newest single “Nobody” will be available on iTunes, Google Play, Deezer, Spotify, SoundCloud and YouTube from May 16.

DJ Qness Gathers His Biggest Collab Team Yet As He Drops 'Starry Sky' with Locnville And K.O

The Muffinz are heading for Bloemfontein

Blast from the past, Cape Towns ‘All Guns Full Ammo’ Lock & (Re)Load with Remastered Version of Their 2011 Debut EP ‘IDKFA’